I set off north from the border post into Western Sahara past countless sand dunes and through ever changing desert scenery. Most of the time the landscape was flat, sandy and devoid of life except for the odd clump of grass.

Occasionally lower areas had bushes and stunted trees and apart from camels the only things that moved in the inhospitable landscape were Crested and Thekla Larks.

Late in the afternoon on the second day the landscape changed to a flat rocky gibber terrain with high sandhills scattered to the horizon. We saw a large sandhill several kilometers from the road and drove across the plains for twenty minutes to camp at the base of the dune. 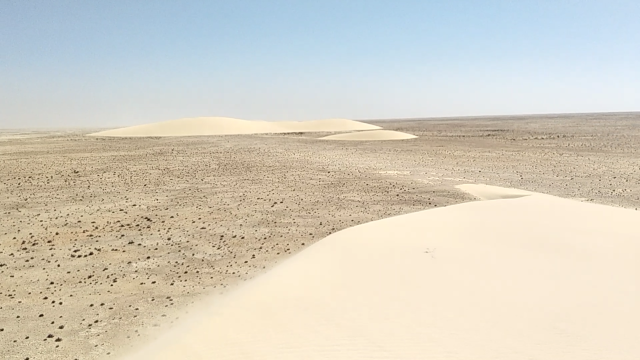 After a nice night tucked in behind the dune we continued our drive north.  Conditions weren’t too bad, there was a breeze and the temperature was only about 40degrees.  The week previously it was 47.

Hard to believe, but Wiki tells me Western Sahara is one of the most sparsely populated places in the world.

On the fourth day we made it to the Atlantic coast, where the desert meets the sea.  With a cool sea breeze the temperatures dropped and we camped a night on the edge of the cliff near a small fishing village. Later that night one of the local fisherman bought three large fleshly caught fish up to our camp and gave them to us, welcoming us to the area.   We wrapped them in foil and put them on the fire……sensational.

Further along the coast were two ship wrecks, so we stopped and walked down the cliffs for a closer look.

Where sand, salt and rust meet. 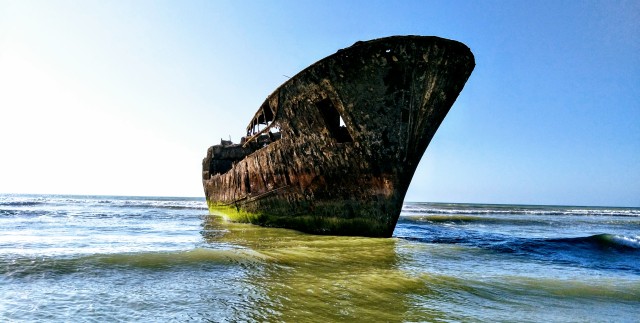 Western Sahara is unofficially part of Morocco and the next day we past two large white camels chewing on a palm tree and entered the official Morocco.

After four months of having the continent to ourselves it was a bit of a shock to see tourists.  We drove into Agadir which was full of holidaying Europeans.  Since leaving Tanzania I’ve only met a couple travelling around Africa in a Suzuki Vitara and two guys on motor bikes near the Congo Cameroon border.  All the non-Africans we’ve met have been UN Peacekeepers or NGO workers.

From Agadir we headed inland through the mountains to Marrakesh. 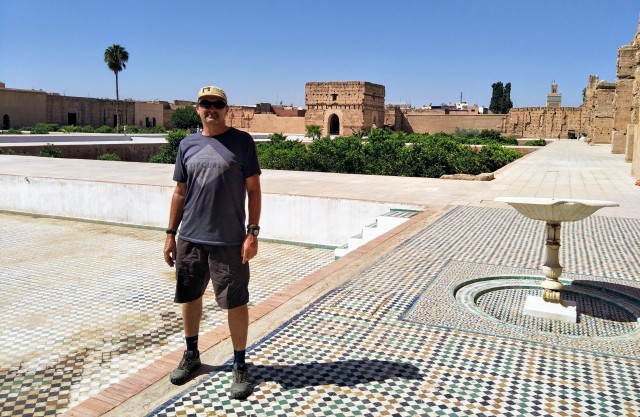 For two days I became a tourist and explored the old city, visiting palaces, soukes, tanneries and of course the Jemaa el Fna square and markets. 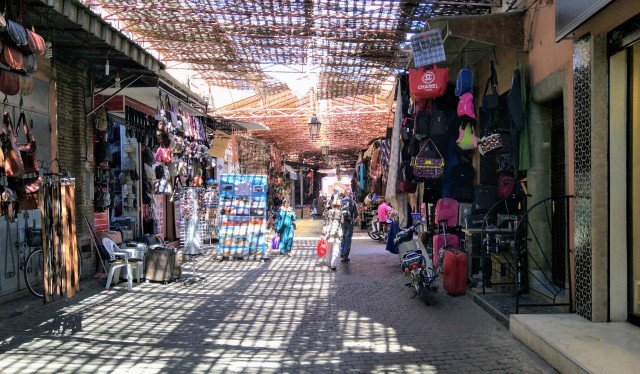 I spent hours walking the narrow streets and alleys of the medina, stopping for lunch at a terrace cafe and continuing onto the Moroccan photography museum

During the day the square is full of snake charmers, henna tattoo artists and musicians. 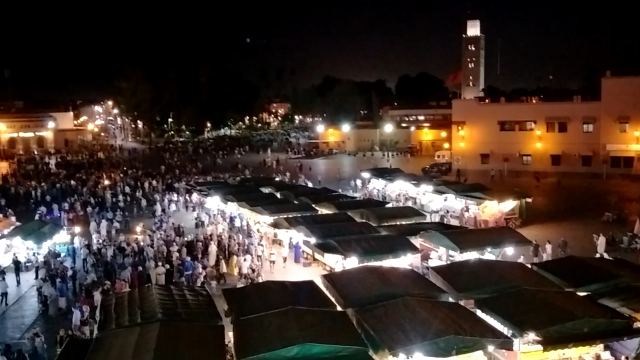 From Marrakesh we continued north to the beach town of Asilah.

I walked down to the beach for an afternoon swim and from a distance my first impression was of a nice beach with good waves, life guards and lots of people on the beach. The reality is your typical Moroccan beach covered from the waters edge to the road in rubbish, nice body surfing sets coming in but no one in the water over their knees and three lifeguards in red and yellow lifeguard outfits siting behind the tent in the shade facing the road watching a game of beach soccer. In the two hours I was there, none of them looked at the water once. I was very tempted to run over and say, “someone’s drowning out there”, just for a laugh. They probably wouldn’t know what to do if I did.

After Asilah we hit the freeway and headed north to Tangier.

At Tangier I caught the ferry to Gibraltar for a day. 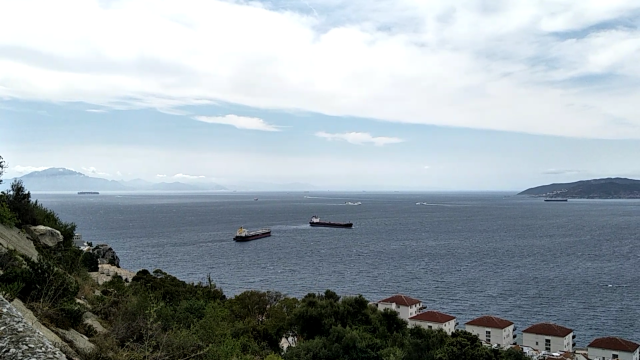 Photo above from Gibraltar with Europe on the right and Africa on the left.

After a day in Gib I said goodbye to my travel buddies and jumped back on the ferry to Ceuta and once back on the mainland headed down to the Rif Mountain town of Chefchaouen, famous for its striking blue washed buildings. 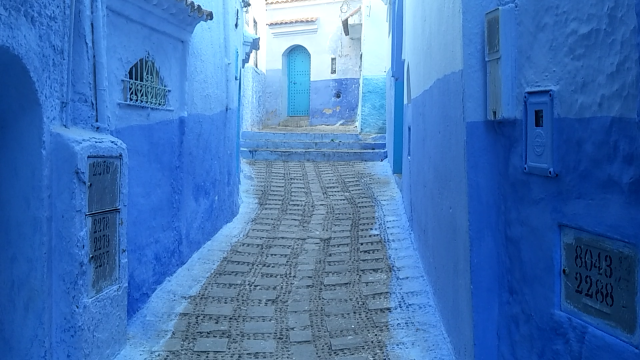 I booked into a small blue motel in the centre of the old town and once again spent three days exploring the back streets and lanes, managing to get lost a couple of times in the maze of alleys and narrow streets.

It was never a problem being lost as the old city is only a few hundred meters wide and you’re never far from a good cafe or helpful local. 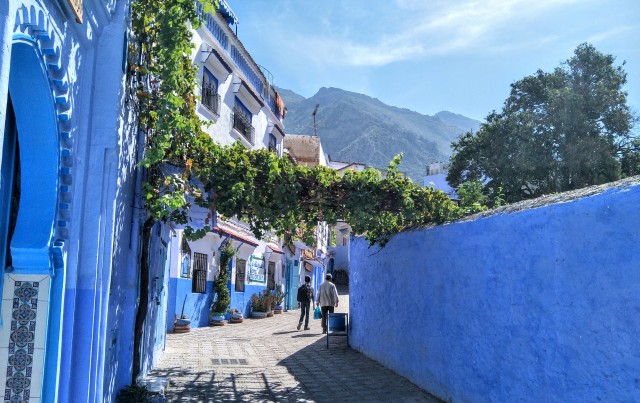 I had lunch in the Uta el Hamman Square and visited the casbah and fifteenth century fort and accompanying dungeon. After three days in bluetown I jumped on a local bus to Tangier.

Tangier is an old sea faring town on the Maghreb Coast of Northern Morocco at the western entrance to the Straits of Gibraltar.  It has been the gateway to Africa for three thousand years and the spot were Hercules stood when he separated Europe from Africa.  I would have liked to have seen that!

Today Tangier is a busy seaside city of three million people and where every building is painted white.

I’m not sure if that’s Spain on the horizon or Europe’s smog.

In Tangiers I hit the beach and spent a couple of days working on my tan and seeing the sites, like this sea cave in the shape of Africa. It even has it’s own Madagascar, although I reckon Madagascar was carved out by some bored Roman soldier back in the day.

Even more impressive is the grotto below. It might look like any other boring old grotto but it’s actually where Hercules put one of his feet when parting the continents. 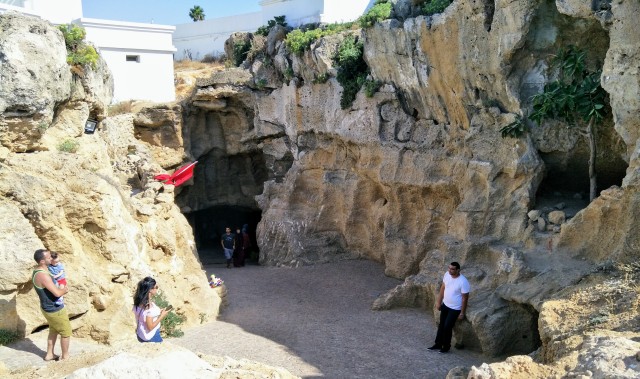 I’ve now been in Western Sahara and Morocco for three weeks and tomorrow night I’m flying out to country number sixteen, Niger.   I’ll wander around Niger for eight days and then fly by back into Casablanca for a day.   My next post will either be from Casablanca or Niamey in just over a week.